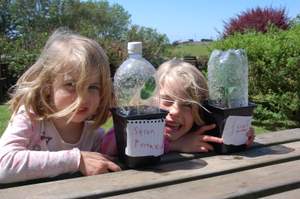 I thought it might be fun to keep a record of the development of two pumpkin plants grown by Lowri and Seren. We chose â€˜Jack of all Tradesâ€™. No idea why, except the packet said they were â€˜perfect for Halloween carvingsâ€™ which is something else we can look forward to. Iâ€™ll try and write a post every now and again detailing their progress. Soon the 7th of June two seeds were placed in 11cm pots filled with standard compost. Then covered with half a lemonade bottle which is an idea I saw on the telly and placed on the kitchen windowsill.

There now outside being â€˜hardened offâ€™, still with their lemonade bottle covers. Iâ€™ll plant them out properly next week some time.

This site uses Akismet to reduce spam. Learn how your comment data is processed.

Or, it might be easier just to use our [Enquiry Form...] and I'll have a look for you. Give me an idea of what your looking for in the 'additional info' bit.